A client shares their journey to achieve 100% growth

How did one of our client achieve 100% growth of revenue?

A global production company asked Ascend for support in transforming the sales organization. Changes in customers’ behavior and increased competition made the management team realize that existing go-to market approach and way of selling wasn’t sufficient to achieve desired results. Ascend helped the client with design and implementation of a new approach to sales by delivering sales simulations, establishing coaching and implementing hands-on sales tools. Three years later, the company shares its insights and reflections on its transformation journey with us.

How it all started

“The starting point was that we wanted our sales organization to transform from an ad-hoc, reactive behavior to become pro-active, value-driven and consultative in their sales approach. They had all heard this before and were more than skeptical going into the sales simulation. But then something happened. Last year, when we were presenting the customers’ buying process and adding our aligned way of selling to the different phases it became very evident that we were out of sync in many of our customer interactions. Individuals were starting to admit to themselves that they were not flawless.

The sales simulation as such, with the fishbowl sessions (simulation of a sales meeting in front of all peers followed by group reflections, red note) in front of a larger audience, was initially a scary exercise. But even these turned into a very positive experience, once the participants realized that it is the audience who must do most of the work in sharing insights and help to improve the moments of truth.

The methodology used, by having the different teams work on real cases and starting the work already four months before the simulation, ensured more involvement and led to a much better result. And by adding functions like supply chain, product management, marketing, production and controlling to the faculty (roles in simulations, acting customer) and audience we achieved a much higher level of understanding of how these functions can support sales.”

What insights did the client make to create a momentum for change and growth?

Following the joint development of a more proactive and consultative way of selling (approach to sales) together with initial sales simulations, the client identified four areas of improvement.

“It is always difficult to say what the real cause for change was, but in this case, there is enough evidence to give credit to the way of selling and the sales simulation.

Financial results this year are up by more than 100% compared to last year. We are, quarter by quarter, setting new records in profitability. Yes, market is in a favorable state, but the vast majority of our improvements are coming from proper sales steering and making the right prioritizations. This is all based on looking at value-add possibilities coming from partnering with relevant customers. “Old truths” have been scrutinized and in many cases dismissed, and our customer base is gradually shifting to customers who are interested in our value-add rather than our competitive offering from a price perspective." 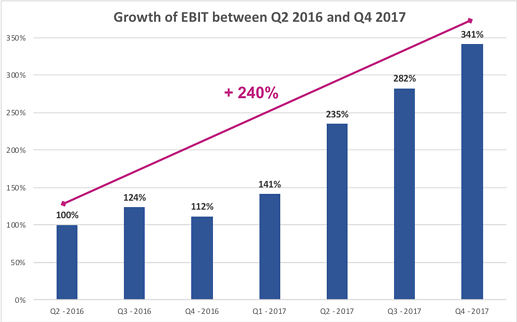 "Conversations have changed. We are much more focusing on the customers and their needs, making sure that we truly understand their pains before talking about ourselves and how we can help them become more successful. The terminology is starting to become recognized more widely in the company.

Value proposition canvasing is becoming a natural way of working. And here the entire organization in containerboards, not only Sales, is embracing this as a tool to understand why changes/improvements are needed in their respective functions to enhance customer value.

The spirit and engagement levels are higher today than one year ago. It was clearly visible during this year’s training that the individuals, living and performing thousands of kilometers apart, have started to come together as teams. A well-motivated sales organization is a must for better performance.”

How will the client continue leverage on the momentum?

By helping the client develop a common ‘Way of Selling’, a value-driven and consultative approach to sales, with focus on the customer, was supported. However, we at Ascend truly believe it is important to remember that fundamental change takes time, especially when addressing behavioral changes. Sales simulations combined with sales coaching and enabling sales tools are to be used iteratively to successfully achieve sustainable growth.

“In the end of 2015, we started rolling the ball and the ball has kept rolling ever since. What started out as an initiative in one Business Unit has spread to all other BUs in the company and has led to us shaping our new CRM system to fit the terminology and methodology of our way of selling and the different stages of the customers’ buying process. We have initiated a group-wide initiative to enhance sales competences to capture those values that the CEO and his team can see coming from our BUs. Value-based selling has become a core competence which the company will aim to foster going forward.

Change will only happen and become sustainable when you focus on it. We have budgeted for two training sessions per year, where we will be focusing on some parts of the buying process to simulate and get better at during those occasions. We are still in the planning phase for the 2018 sessions, but I already got some proposals from individual sales reps on things they would like to be challenged with during the trainings.

I have a very good feeling going into 2018 with two successful sales simulations under my belt, and the visible results coming out of them. Already looking forward to the next one – and the queue of people who want to participate is starting to get very long!”