A story of digital transformation in the fuel industry

Ascend worked with the company to develop a business-driven digitalization agenda based on the company’s business strategy, to make IT an integrated enabler for future business success. The work was facilitated by Ascend and driven by the customer.

One of Ascends customers is a leading European fuel company, with a clear agenda to transform from fossil to renewable raw materials. On that journey, they are struggling to efficiently become more digital. One reason is that different business areas within the company have widely diverse requirements on IT development. For example, critical 24/7 production units require safe and sustainable solutions, whereas customer facing stores asks for rapid and agile development. The complexity of digitalization was also increased by an outdated set of IT systems and a “technical debt”, due to overlooked modernizations and adjustments during the past years.

As the IT department hadn’t found a way to state and communicate their added value to the business, they hadn’t earned enough trust from the business areas. The IT dimension was detached from the corporate business planning and strategy work. Instead, several parts of the business bought their own unsupported technical solutions ad-hoc elsewhere. The IT department was usually informed late or never in the processes of business need developments.

Ascend worked together with the company to develop a business-driven digitalization agenda based on the company’s business strategy, to make IT an integrated enabler for future business success. The work was facilitated by Ascend and driven by the customer. The work resulted in a process that can easily be carried out every year to align and update the goals, principles, and plans of digitalization. One of the most crucial steps in developing a documented IT agenda was to align ambition and goals of digitalization with each business unit. Visualizing and discussing ambition together became of great importance to build trust and relationships with the departments. Following that step, prioritizations and principles for the IT department and their way of working was established.

Ascend secured that the work was iteratively carried out in workshops, working groups, and steering groups. Together with Ascend the customer also established a dedicated team to act as the bridge between IT and the business in the long run. The digitalization agenda resulted in goals, principles, and roadmaps with a prioritized focus for the coming years. The IT roadmaps also clearly identified needs and desires overlapping several business units, which became an important tool in driving increased integration, communication and alignment between IT and the business.

Here are our key learnings of digital transformation in this project: 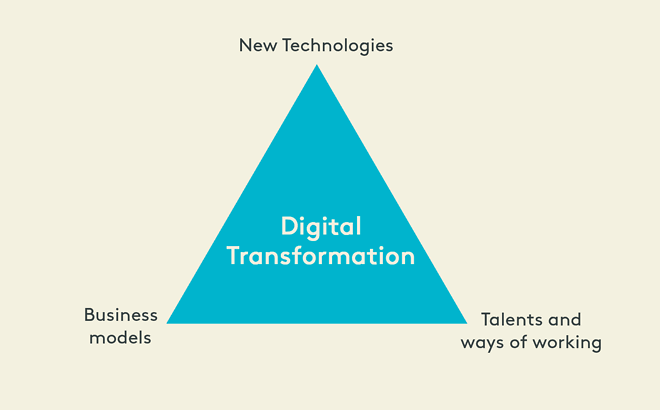 Other articles you might like
How can HR take the leading role in the agile transformation?
Avoiding pitfalls in your sales transformation
With a passion for Sales Excellence
View all